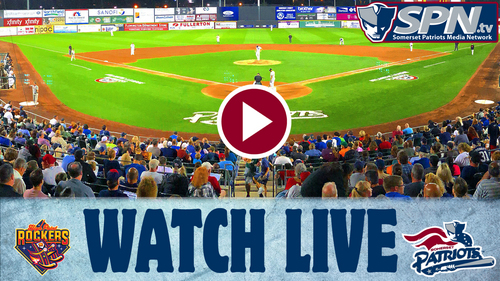 Series at a Glance
Monday (6:35 pm) HP def. SOM 4-0; Paul Clemens 6.0 IP, 0 H, 0 R, 2 BB, 2 K; Quincy Lattimore 2-4, 2B, 2 RBI
Tuesday (6:35 pm) HP [RHP] Joe Van Meter (0-0, 0.00 ERA) @ SOM [LHP] Logan Darnell (0-0, 0.00 ERA)
Wednesday (6:35 pm) HP [RHP] Matt Sergey (0-0, 2.25 ERA) @ SOM [RHP] Liam O’Sullivan (0-0, 0.00 ERA)
Click here to view tonight’s complete game note: GAME NOTES 4.30.19
FIRST OF MANY: The High Point Rockers make their way to TD Bank Ballpark this week for the first time in franchise history. The newest ALPB member opened their inaugural season by taking 2-of-3 over the Lancaster Barnstormers and earned a 4-0 shutout win over the Patriots Monday night.
OLD GODS VS THE NEW: This week’s matchup between the Rockers and Patriots marks a meeting between the oldest franchise in the Atlantic League (Patriots, 1998 inaugural season) and the newest (Rockers, 2019 inaugural).
(500) WINS OF SUMMER: Brett Jodie returns for his 7th season as manager. He is now 11 wins shy of 500 wins in his managerial career. He was the fastest manager in ALPB history to win 250 games when he reached the mark in 2015.
A-B-C, EASY AS 1-2-3: The Patriots have three strong left-handed relief pitchers in Mike Antonini, Duane Below and Luis Cruz. The three pitchers have combined for three Atlantic League Mid-Season All-Star selections and one Post-Season All-Star selection over ther seven-combined seasons in the league.
KENGOR KONG: Newcomer Will Kengor has gotten his Patriots career off to a fast start, going 5-for-12 at the dish with three runs, three RBI over four games. He is tied for 5th in the league in hitting (.455) and tied for 7th in OBP (.500).
30 POUNDS DOWN: After losing over 30 pounds during the offseason, 2nd-year Patriot Ramon Flores is hitting .429 (6-for-14) with five RBI (T-5th in ALPB) so far.
OHL OHL OHL, IT’S MAGIC!: 1ST-year catcher Michael Ohlman has reached base two times in each of his first four games as a Patriot. He has two two-hit games along with a two-walk game as well. The former Blue Jay is tied for the league-lead in OBP (.571), 4th in OPS (1.208) and is tied for 5th in AVG (.455).
YOU ALWAYS REMEMBER YOUR FIRST: LHP Mike Antonini – in his 3rd season in Somerset and 13th in pro baseball – recorded his first career save Sunday afternoon against New Britain with a scoreless top of the ninth inning.
HELLO, MY FRIEND, HELLO: The Patriots return 14 players from their 2018 roster. Additionally, LHP Logan Darnell returns from the 2017 roster while LHP Brett Oberholtzer was with the team during Spring Training last year.
ONE NEW JERSEY: The Patriots boast a number of local talents on the roster, including newcomers James Pugliese (Hamilton) and Steve Nyisztor (Toms River) alongside returnees Scott Kelly (West Windsor) and Nate Roe (Plainfield).
FAST OUTTA THE GATE: Somerset has had a recent history of getting off to fast starts, including a series-sweep of their opponent to begin the year between 2016-’18. Including this year’s series-win over New Britain, they have won their opening series in four-straight years. The Patriots finished their opening homestand 5-1 in 2018, 6-1 in 2017 and – most impressively, 7-0 in 2016 en route to a 13-game winning streak to begin the season.